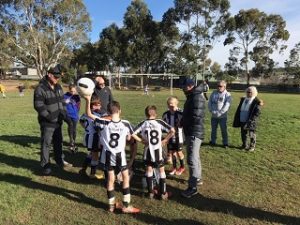 Hahndorf Black versed Stirling Districts White in the first match after the winter break. Both sides had the bare 7 players, and both coaches did a great job rotating positions so players could take a turn resting in defence.

The match started evenly, with both teams creating opportunities. Stirling were the first to score after an unlucky turnover, however it didn’t take long for Hahndorf to even the score thanks to a powerful left-footed strike by Ryley Neumann from the mid-field into the back of the net.  Almost immediately, Zack Schwarz scored Hahndorf’s second goal with some fancy footwork in front of goal.

Oliver Saracini-Palombo, Jacob Gardner and Toby Files (goal keeper) worked well in defence, preventing Stirling from scoring again in the first half. Hayden Lien linked well with Neumann in the mid-field, running from end-to-end on several occasions, and Patrick Hinze was unlucky in attack, making some great moves into space and delivering passes to team mates.

More rotations at half time saw Hinze taking on the goal keeper role for the first time this season, which proved to be very successful, preventing any further goals by Stirling.

After a slow-ish start to the second half, Hahndorf found their groove and put together some great passing plays.  This great work soon paid off, with Neumann scoring his second goal in a similar left-footed manner.  Lien scored the final Hahndorf goal after single-handedly disposessing the Stirling defenders and finding the back of the net.

Another great team game by Hahndorf Black, with weekly improvements of passing, talking and moving down the sideline.  The Otto’s bakery voucher for this week was awarded to Ryley Neumann for his great midfield play and two fabulous goals.

What a wonderful sunny morning on the Hahndorf pitch hosting Stirling United. Hahndorf did a magnificent job on the soggy field with some strategic passing by Toby Files and Harrison Gould. Excellent defensive midfield from Stirling.  Zack Schwarz was proactive in defence, a great support for Oliver Saracini-Palombo who was standing in goals. Great pressure from Thomas Filipowicz and Ryley Neumann! Effective tackling by Patrick Hinze. Hayden Lien and Jacob Gardener did a wonderful job in attack. Congratulations to Lien for scoring Hahndorf’s first goal.
The second half saw brilliant goals from Neumann and Gould. A well played game by both teams.

It was a crisp morning when the Hahndorf Under 10 Black team met with the Murray Bridge United U10 Blue team.

From the first whistle it was evident that we were in for a great game of soccer at the Hahndorf Soccer pitch.

Jacob Gardiner and Harrison Gould started the game in a spectacular manner with both attempting early shots on goal. Both times the ball was saved by Murray Bridges goalie. After some great play by Patrick Heinze, Thomas Filipowicz and Ryley Neumann the ball ended up with Gould who kicked a strong goal.

Oliver Saracini-Palombo was fantastic as Hahndorfs goalie and did not let a ball get through!

Neumann gained control of the ball and skilfully passed to Toby Files who was unlucky not to score with a fantastic shot on goal.

Heinze played a solid game in defence and gained control back of the ball on numerous occasions. The first half finished with Gould putting the ball to the back of the net again.

After an energy fuelling orange break and with some encouraging words from the coaches the team were ready for the second half.

Gould started off as the goalie for Hahndorf. After some great teamwork Files found the ball and lined up a shot on goal. After a very strong kick he was exceptionally unlucky to miss the goal.

A kick in during a corner saw the ball head towards Gardiner who in turn shot for goal and narrowly missed. Great spirit and hard work saw Files, Heinze and Saracini-Palombo bring the ball back near attached and Zack Schwarz lept forward and kicked his first goal for the game. It was not long after that Lien followed suit for another Hahndorf goal.

Neumann and Schwarz both saw the way clear in getting the ball through for another goal each.

It was great to see the Hahndorf team work so well together. Thank you to the coaches, referee and the Murray Bridge team for another fantastic game.

Under cool and over cast conditions Hahndorf started by showing some strong early attack with Hayden scoring off his second attempt at goal. Then good defence from Hahndorf stopped a move forward by the Rangers before Zac scored Hahndorf’s second goal shortly thereafter.

A great chase and pass by Hayden resulted in another shot at goal by Zac. Rangers moved a rebound forward quickly and scored their first goal in the 12th minute of the first half.

The Rangers defence was heavily tested by numerous forward moves by Hahndorf and they held strong despite Hahndorf peppering the goals late in the first half.

Hahndorf started the second half in the same way with early shots on goal by Hayden and Oliver before a strong break out of defence resulted in Riley scoring Hahndorf’s third goal.

Rangers replied soon after following rebound out of Hahndorf’s defence. A smart throw in by Jacob followed with Hayden’s second goal for the match. Shortly after, Tobi made a successful medium range shot for Hahndorf’s 5th goal.

Rangers got past Hahndorf’s tight defence to score their 3rd goal and a regrouped defence cleared a further chance for Rangers before Tobi launched the ball over the goals.

With the clock against them Rangers scored their 4th goal before Hayden had another shot for goal that hit the right post. Hahndorf’s goalie, Thomas Filipowicz, made a save right on the final whistle.

The game kicked off at a fast pace with good ball movement between Hayden Lien and Ryley Neumann.  Lien had two cracking attempts at goal early in the piece however Stirling’s defence was able to deflect a result.
Jacob Gardner attacked well with Patrick Hinze well-positioned .
Stirling had multiple goal attempts in the first half however Hahndorf goalie Zack Schwarz was able to save.
Neumann’s continued reading of the play allowed him to weave some magic and score Hahndorf’s first goal.
The half time break saw Hahndorf’s Thomas Filipowicz as goalie, and he was terrific in saving more attempts at goal from Stirling.  This helped to set Lien up in scoring the Magpie’s second goal.
Brilliant running from defence and into attack by Neumann, and defensive play by Oliver Saracini-Palombo made it difficult for Stirling to score, however they did get celebrate a goal late in the second half.
Great game played by all.

Under overcast conditions Hahndorf started off showing some strong defence with Ryley Neumann making a great save early in the game before Hayden Lien had an attempt at a long shot for goal.

Some more great defence from Harrison Gould and Thomas Filipowicz resulted in the ball moving forward for another shot for goal by Lien.

After breaking through Hahndorf’s persistent defence, Woodside scored their first goal for the game. A great run by Lien resulted in him being awarded a free kick in front of the goals but Woodside’s defence held up.

Zac Schwarz came on the field a few minutes later and almost immediately kicked a goal to level the scores 1 all.

Hahndorf cleared the ball forward resulting in Jacob Gardner having a shot just out of the square.

Woodside made a fast clearance from the goal kick and scored their second goal.

Neumann made another great save off a Woodside corner as light rain began to fall.

Oliver Saracini-Palombo showed some great balls skills in defence shortly before Neumann made another great save.

More great defence from Patrick Hinze and Lien stopped Woodside moving the ball forward just before the half time whistle.

Neumann moved forward in the second half and scored Hahndorf’s second goal from a long shot.

Lien made a great cross to set up a shot on goal just before Woodside scored their third goal from the rebound.

Hahndorf continued to pepper the goals with Lien, Gould and Toby Files all going unrewarded.

Woodside responded quickly with a series of attempts at goal but Gardner proved his abilities as goal keeper.

Some great passing set up Gould for Hahndorf’s final goal.  As the rain continued, Schwarz made a last ditch run forward before the final whistle blew.

Ryley Neumann continued to demonstrate the skills reminiscent of the world’s greatest soccer players. Lovely leg and foot work by all boys certainly demonstrating some positive coaching by Adrian Files and Christian Neumann. Great passing from Hayden Lien as well as Toby Files. A great attempt at a goal in  second half by Neumann and another by Files. The Black’s first goal was put away by Zac Schwarz. There was another attempt at goal from the mid field by Oliver Saracini Palombo but was skillfully saved by the opposition. Patrick Hinze, Jacob Gardener, Thomas Filipowicz and Harrison Gould all played well and we look forward to another positive year of soccer in 2019!